In the summer of 2015, the Risa Fund collaborated with the 11th Street Bridge Park, Artolution, and ArtReach at THEARC to convene DC high school students through the collective painting of a mural envisioning a healthy city, community, and neighborhood.

I was so touched hearing directly from the students sharing their personal experiences over the last two weeks. I don’t think I have ever witnessed such a stunning example of the power of art to connect and create.
– Scott Kratz, Director, 11th Street Bridge Park

Max Levi Frieder of Artolution facilitated a two-week workshop with DC teens to illuminate the diverse values of neighborhoods on both sides of the Anacostia River through the painting of a mural. The workshop focused on artistically representing each community through dialogue and relational empathy.

The final product is an inspiring example of diverse, creative minds working together to create something truly exceptional. [panoramic photo courtesy of artolution.org]

The mural will become a permanent gift to the environment in which it was created. It will be displayed in venues across the city, including the ArtReach at THEARC’s gallery, the Ronald Reagan Building, the DC Commission on the Arts and Humanities, and finally the completed 11th Street Bridge Park. 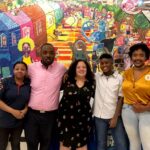 August 2019 Update:
The @artolution mural continued its journey en route to the completed @dcbridgepark. It’s currently displayed at the new Children’s Health Center at @thearc_dc and was celebrated at an August 2019 reception. We heard several of the original artists discuss their inspiration and participation in the creative process.

When we started brainstorming on all of the issues,…everybody noticed the same exact things. So it was really easy from that point on to gel everyone together and get everybody to work on it.
– Courtney Davis, mural participant

About the 11th Street Bridge Park

A project of Building Bridges Across the River at THEARC, the 11th Street Bridge Park will transform an aged freeway crossing the Anacostia River in Washington, DC into the city’s first elevated park.

Expected to open in 2018, the park will foster healthy recreation, environmental education, and the arts.
www.bridgepark.org

The Artolution is a community-based public arts network composed of over 200 collaborative murals in 12 nations around the world. The initiative facilitates opportunities for communities to empower themselves through creative, participatory and collaborative public art making.

Founder Max Levi Frieder has used art as a method of resolution with both youth and adults around the world.
www.artolution.org

About ArtReach at THEARC

ArtReach, a year-round museum outreach program, is designed to empower D.C. youth and families to explore and trust their own creativity within the context of art making and art history. It provides free arts instruction such as family workshops, after-school and summer art classes.
www.thearcdc.org

The Risa Fund seeks to enhance the well-being of underserved youth in Washington, DC through arts and athletic enrichment and improved access to mental health services.

Do You Need Help?

The Risa Fund, along with our minds matter, has compiled a quick-reference guide to mental health resources in the DC area, from emergency support to long-term mental healthcare needs.